The SPHY model has been developed by combining the best components of existing and well tested simulation models: HydroS, SWAT, PCR-GLOBWB, SWAP and HimSim. SPHY was developed with the explicit aim to simulate terrestrial hydrology at flexible scales, under various land use and climate conditions. SPHY is a spatially distributed leaky bucket type of model, and is applied on a cell-by-cell basis. In order to minimize the number of input parameters, and avoid complexity and long model run-times, SPHY does not include energy balance calculations, and is therefore a water-balance based model. The main terrestrial hydrological processes are described in a physically consistent way so that changes in storages and fluxes can be assessed adequately over time and space. SPHY is written in the Python programming language using the PCRaster dynamic modelling framework.

An overview of the SPHY model concepts is shown in the Figure. SPHY is grid-based and cell values represent averages over a cell, but sub-grid variability is taken into account. A cell can be glacier-free, partially glacierized, or completely covered by glaciers. The cell fraction not covered by glaciers consists of either land covered with snow or land that is free of snow. Land that is free of snow can consist of vegetation, bare soil, or open water. In order to distinct between land cover types at sub-grid level, SPHY calculates and stores the state variables as grid-cell averages. Sub-grid variability is mainly determined by the fractional vegetation coverage, which affects processes such as interception, effective precipitation, and potential evapotranspiration. 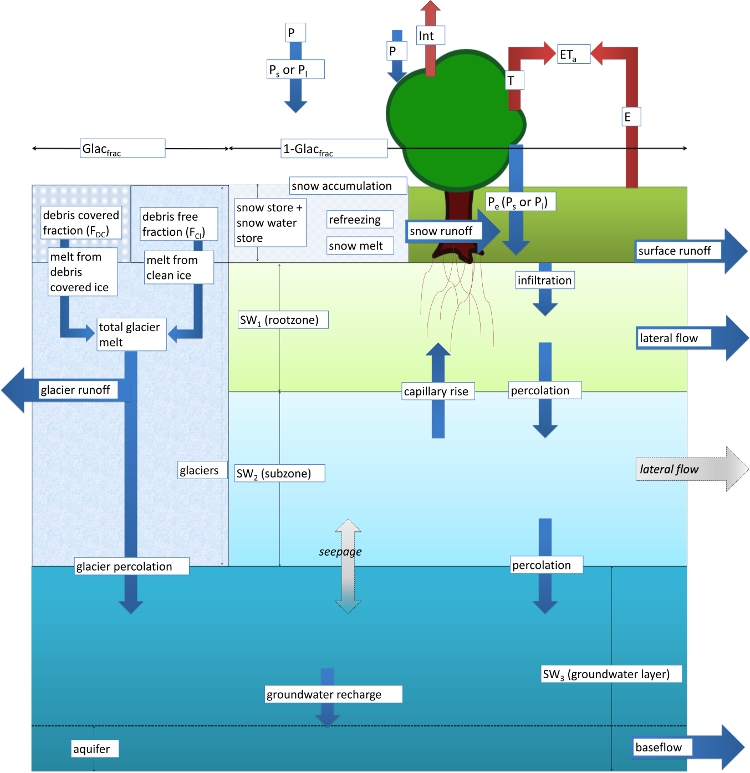 The land compartment is divided in two upper soil stores and a third groundwater store, with their corresponding drainage components: surface runoff, lateral flow and base flow. SPHY simulates for each cell precipitation in the form of rain or snow, depending on the temperature. Any precipitation that falls on land surface can be intercepted by vegetation and in part or in whole evaporated. The snow storage is updated with snow accumulation and/or snow melt. A part of the liquid precipitation is transformed in surface runoff, whereas the remainder infiltrates into the soil. The resulting soil moisture is subject to evapotranspiration, depending on the soil properties and fractional vegetation cover, while the remainder contributes in the long-term to river discharge by means of lateral flow from the first soil layer, and base flow from the groundwater reservoir.

Melting of glacier ice contributes to the river discharge by means of a slow and fast component, being (i) percolation to the groundwater reservoir that eventually becomes base flow, and (ii) direct runoff. The cell-specific runoff, which becomes available for routing, is the sum of surface runoff, lateral flow, base flow, snow melt and glacier melt.

If no lakes are present, then the user can choose for a simple flow accumulation routing scheme: for each cell the accumulated amount of material that flows out of the cell into its neighboring downstream cell is calculated. This accumulated amount is the amount of material in the cell itself plus the amount of material in upstream cells of the cell. For each cell, the following procedure is performed: using the local drain direction network, the catchment of a cell is determined which is made up the cell itself and all cells that drain to the cell. If lakes are present, then the fractional accumulation flux routing scheme is used: depending on the actual lake storage, a fraction of that storage becomes available for routing and is extracted from the lake, while the remaining part becomes the updated actual lake storage. The flux available for routing is routed in the same way as in the simple flow accumulation routing scheme.

As input SPHY requires data on state variables as well as dynamic variables. For the state variables the most relevant are: Digital Elevation Model (DEM), land use type, glacier cover, reservoirs and soil characteristics. The main dynamic variables are climate data such as precipitation, temperature, reference evapotranspiration. Since SPHY is grid-based optimal use of remote sensing data and global data sources can be made. For example, the Normalized Difference Vegetation Index (NDVI) can be used to determine the Leaf Area Index (LAI) in order to estimate the growth-stage of land cover. For setting-up the model data on streamflows are not necessary. However, to undertake a proper calibration and validation procedure flow data are required. The model could also be calibrated using actual evapotranspiration, soil moisture contents, or snow coverage.

The SPHY model provides a wealth of output data that can be selected based on the preference of the user. Spatial output can be presented as maps of all the hydrological processes. Maps often displayed as output include actual evapotranspiration, runoff generation (separated by its contributors), and groundwater recharge. These maps can be generated on daily base, but most users prefer to get those at monthly or annual aggregated time periods. Time-series can be generated for each location in the study area. Time-series often used are stream flow under current and future conditions, actual evapotranspiration and recharge to the groundwater.